For those who don't know livecoding.tv first started as a live streaming platform for software development (think of it as twitch for programmers). Initially, I was really excited about this idea and I have even been streaming on the site for 111 hours gathering approximately 100 followers. I wasn't the best streamer, my mic was bad, I seldom talked but the projects I showed were interesting to create and watch.

No one was earning money at the beginning (not streamers, nor livecoding), but if I recall correctly they soon added a "recruiter" plan which might have lead to some earnings for the platform.

So far so good, the community was growing, more and more streamers came to the site (even though they weren't earning anything) and viewers were interested in this idea.

It then all went downhill.

They soon added a "PRO" plan so that streamers could stream "premium content" that only PRO users could watch. It was good on paper, but they made two big mistakes:
I recommend reading this discussion in the comment section where they announced the PRO plan. The main issue that I see in their attitude is that they thought it was fine to put themselves above the streamers. Deciding that a source of income is needed while ignoring the content creators was justified by saying "don't worry, we will care about you in the future!".

Why pivot if it's going well?

After they reduced the PRO plan to $9.99 and genuinely seemed interested about the streamers, they made the bold move of rebranding livecoding.tv to liveedu.tv. If you ask me, this is by far the biggest mistake they made. I don't know their reasoning, but it was probably related to making the platform more general, an educational platform not necessarily for coding. They seem to try turning the platform more into a directory of premium videos (udemy?). If that's the case, why keep the live in the name?

The name livecoding was actually a good website name: memorable, easy to pronounce, easy to write and it was accurately describing what the site was about.

I will name a few issues that really stop me from using or recommending liveedu.tv anymore, but first let's see how friendly is it for new users.

I tried today accessing liveedu.tv to see if it's worth going back.  I clicked to watch the stream featured on the homepage. 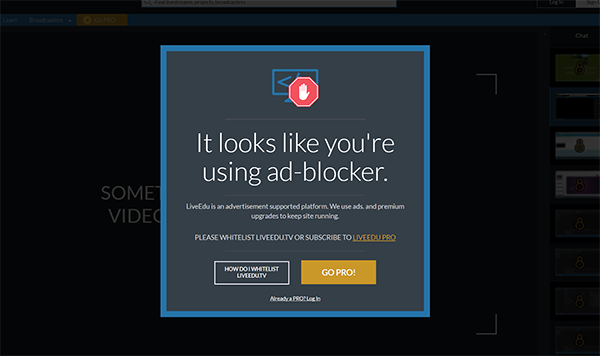 Most users leave when they see this, but I added the site to the ad-blocker exceptions.

If I were a new user I might have left immediately not wanting to waste time creating a new account. Luckily I was an old user so I logged into my existing account (well, it wasn't that easy, because they changed their domain and my password manager did not autofill my credentials and I had to go search for it).
After I logged in I got the same screen as above but saying "SOMETHING WENT WRONG",  message which seems to show on some streams.

Now, a list of other issues that just makes me wonder how a good idea turned out so bad: 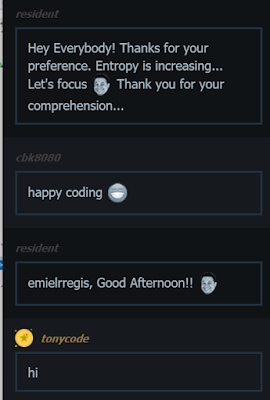 I have only described the bad parts that I see, feel and felt from my perspective, the perspective of a streamer and occasional viewer. Let me know if you think I have been to harsh judging this site , site behind which is probably an amazing team of developers.

In conclusion, for me LiveEdu.tv is a platform that is too bulky, difficult to use and lacks enough good content to be worth using. I really wanted to see again and interact with the old spirit of LiveCoding.tv, a lean platform on which both the viewer and streamer are respected, but that spirit seems to have been stolen by the Greed Monster.

PS: LiveEdu might actually be a success and their premium projects directory might have a bigger community than I expect, but I have not yet had any contact with that side of the platform.

Later edit (20 June): LiveEdu just released a blog post introducing the new subscriber plans AND limiting the amount of content you can watch for free. I don't understand why they keep focusing on pricing instead of the content.